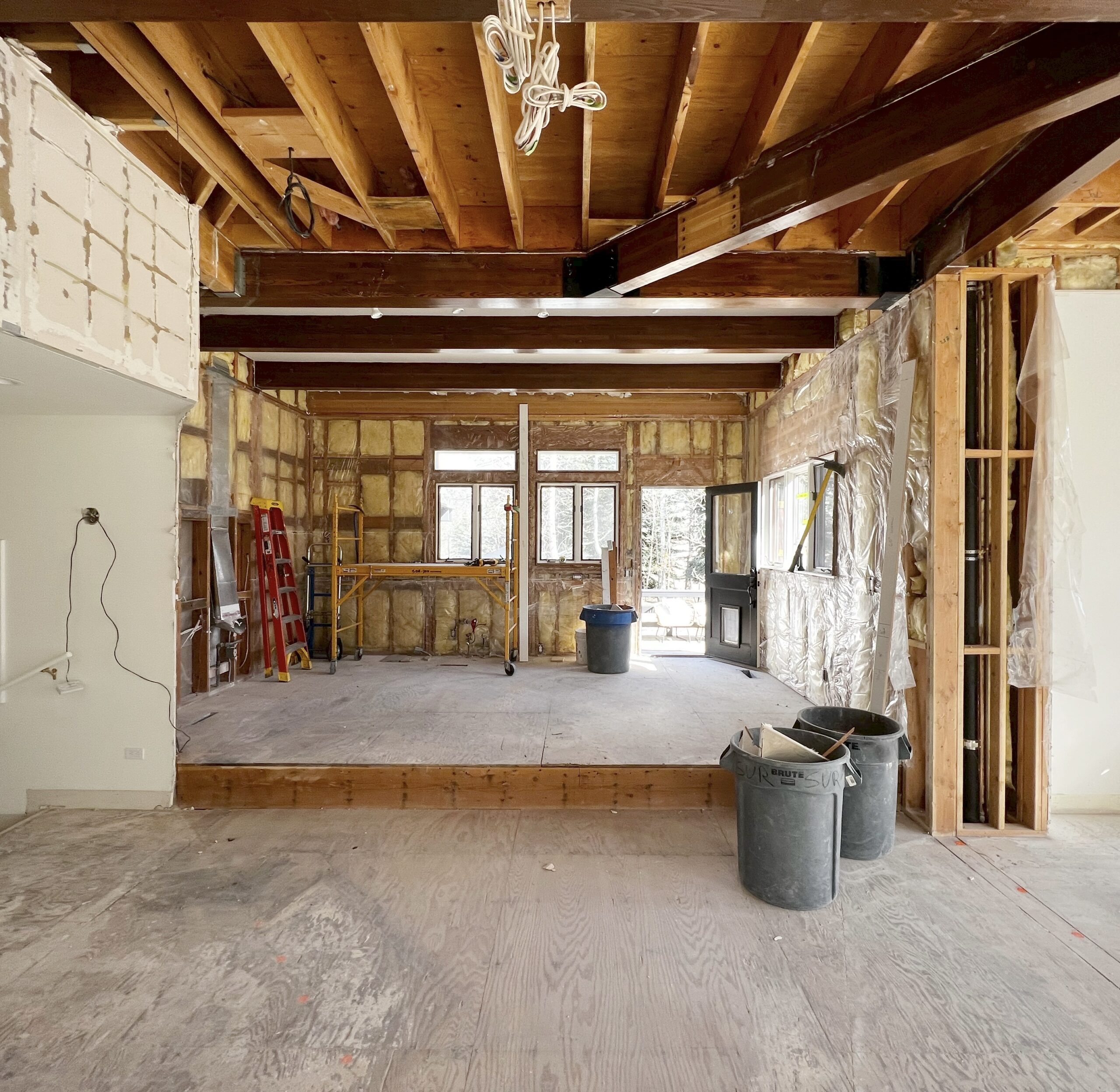 You guys!!! There have been so many changes with the remodel in the past month. I honestly can’t believe how it’s already coming together. In my experience, once contractors begin to demo and open up walls, road blocks in design start to pop up. This go around, I’m happy to say, it’s been VERY positive. On today’s post I’m going to share where we currently stand with the NEW design and updated renderings!

Below you will see the progress of the remodel along with different angles of the new design. Note the renderings are very basic so we could just see the spaces. They do not reflect finishes: i.e. colors, lights, fixtures as well as the cabinetry design. If you want to see what I selected, check out my first post about the remodel here.

I can’t wait to see it come to life!

THE biggest improvements since the initial concept are…

2. Removing the angled wall in the kitchen

Note these were both possible because we found out the kitchen had a false floor, meaning nothing underneath it, as well as the angled wall not being structural. So both were easy to remove and not crazy expensive.

These changes allowed us to open up the entire space. This also means buhhhhh bye oddly shaped kitchen island! We can square off the room to the rest of the house so the kitchen feels part of the adjacent spaces. The nook, bar and kitchen are now on the same level! In addition the doors leading outside from the kitchen (rendering below) are now flush with the deck.

A few of the design flaws of this home are the crazy amount of steps, levels and angles. This change removes steps throughout and oddly placed walls, creating a more modern floor plan. YAY!

Before – raised kitchen and angled walls

A few other important changes to note…

3. Dropping the ceiling in the kitchen/nook to cover the beams

4. Opening up the entryway area

Since we gained height after dropping the floor we decided to cover up all of the crazy beams on the ceiling. They are structural so we could get rid of them. Wrapping them was an option however VERY expensive. We were going to paint them white to “go away” but now we have the option of dropping the ceiling. This means it will clean up the entire area and we can place lighting wherever we’d like. Both positive!

Another change that was brought to us was opening up the entryway. When you walked into our home we had a cold entry, meaning there was another door on the other side. Something many cold weather climate houses have. There was a coat closet to the right taking up a lot of room and a little interior window randomly placed (image below). I wasn’t a big fan of the design. It looked weird, felt cramped and was not very functional. SO we are removing the closet, taking out the door and opening it up to a large walkway as well as getting rid of the interior window. It’s going to be much more welcoming walking into the home!

Now that we are a month into it we have a much better understanding of where the design is going. Everything has been demo-ed, kitchen floor is dropped, new window and doors are in, ceiling has been lowered and entry is reframed. Images of the progress below. More to come!

Your email address will not be published. Required fields are marked *